The Board of Directors approves the Quarterly Financial Report at 30th September 2016. Confirmed growth of all economic indicators

Results for the first nine months confirm sharp growth of all economic indicators and continuation of the positive trend recorded in the first half of the year. Specifically, EBITDA recorded an improvement of 25.5% to 66.6 million Euro, with the margin up from 13.6% to 15.8%, despite the return to a more sustained level of investment in R&D in the third quarter and net profit rose to 40.9 million Euro, up by 34.4%.

The Chairman and CEO of the Datalogic Group, Romano Volta, commented: “We are very satisfied with the results achieved during the first nine months of the year, during which the Group's profitability has been at its highest levels in the last decade. Despite the seasonal nature of the third quarter and the tipical pre-electoral uncertainties in the United States, which has partly slowed growth in revenues, margins continue to benefit from measures to contain operating costs. During the quarter, investments in research and development returned to our physiological levels, optimal for the development of new products with high innovative content, such as the latest initiatives in the mobile segment, DL AXIST, Joya Touch and the new Shopevolution 7 software, which are receiving excellent feedback from our customers and which we expect to have a positive impact on sales. Implementation of the new process for reorganisation by verticals - Retail, Manufacturing, T&L and Healthcare - was also launched during the quarter, bringing us closer to the needs of our customers and further optimising our production processes, taking full advantage of market potential."

Operating costs, equal to 140.5 million Euro, were essentially in line with the corresponding nine months of 2015 in absolute terms, while they showed a sharp improvement in terms of impact over turnover from 35.9% to 33.3%. This trend reflects measures aimed at containing general administrative expenses, to the benefit of the increase in Research and Development expenses, which grew by 5.4% to 36.6 million Euro and 8.7% of revenues. These costs highlight a higher impact on turnover during the quarter, equal to 8.8%, compared to 8.3% in second quarter of 2016, indicating a recovery of the postponement observed in the first part of the year. Also showing improvement were distribution expenses in terms of impact on turnover, declining from 19.1% in the first nine months of 2015, when they were influenced by higher investments due to strengthening of the distribution network in North America, to 17.8% for the current period, and essentially in line in terms of absolute value.

The impact of new products on turnover during the quarter was equal to 20.4%, compared to 27.4% in the second quarter.

EBITDA is equal to 21.7 million Euro, up by 15.6% compared to the third quarter of 2015 and down 17% compared to the year's second quarter, which benefited from higher growth in revenues and from the postponement of a number of R&D costs.

(*) With the purpose to better report the operating sectors economic performances, it was deemed appropriate to highlight the Divisional EBITDA as monitoring KPI.

EBITDA is up by 20.1% to 71.9 million Euro, with a margin of 24.6%, an increase of 2.3 percentage points compared to 22.3% during the corresponding period of the previous year, confirming the division's excellent performance as a result of improvement in operational leverage and containment of costs.

The Industrial Automation Division, specialized in the design and production of automatic identification systems, safety, detection and marking solutions for the Industrial Automation market, reported a turnover of 112.9 million Euro, up by 9.2% compared to the first nine months of 2015 (unchanged increase at a constant Euro/USD exchange rates) and 37.2 million Euro in the third quarter of 2016, highlighting slight growth compared to the third quarter of 2015. Net of the results of the Systems Business Unit, which was the subject of a spin off on 1st October, the Division's revenues increased by 5.4% to 99.1 million Euro (unchanged increase at a constant Euro/USD exchange rates).

In terms of revenues, double-digit growth was observed in Europe, thanks to the highly positive performance of bar code readers in the industrial segment and of safety light curtains.

Informatics reported a turnover of 18.6 million Euro, compared to 22.1 million Euro in the first nine months of 2015, down 15.9%. This performance was impacted by the recent organisational changes and the shift to a new business model that focuses on long-term services.

Looking at the geographical areas, the first nine months of the year showed highly positive performance in sales on the European market, including Italy, which is driving the trend, with revenues of 216.2 million Euro (+9.5%), while the North American market is growing at rates above the market, up by 8.0% to 126.4 million Euro.

There are no relevant events to report.

EVENTS OCCURRING AFTER THE END OF THE QUARTER

The spin-off of the Systems Business Unit became effective on 1st October 2016. This operation involved the establishment, by Datalogic Automation Inc. (US subsidiary of the Company), of a newco - Solution Net Systems, Inc., with headquarters in Quakertown, Pennsylvania (USA) - into which all of the Systems BU's assets were transferred. Starting from said date, therefore, Solution Net Systems, Inc. will provide customers of the Datalogic Group with integrated solutions for automated distribution in the postal and retail segment, previously provided by the Systems Business Unit of the Industrial Automation division.

On 18th October, Alessandro D'Aniello was appointed new Group CFO and Manager responsible for drawing up the company's financial statements within the Datalogic Group.

A project was launched during the quarter with the aim of redefining all customer-oriented corporate processes of the Datalogic Group, with a view to becoming increasingly Customer Driven. Consequently, customers will benefit from maximum quality in terms of product and effectiveness of the services offered. We expect this project to render the corporate structure of the Datalogic Group more effective, thus improving Customer Satisfaction. The Project is indicatively expected to go live on 1st January 2017.

The results of the first nine months confirm the Group's positive performance. In particular, the ADC Division continues to boast steady growth in fixed retail scanners and mobile computers across all geographical regions. The Industrial Automation Division benefits from growth beyond expectations in Europe, while it is impacted by a continued reflective trend in the American market.

The Group will continue to make significant investments in R&D (already 8.7% of turnover), confirming innovation as a key pillar for Datalogic's future, rewarded by the growth in turnover from new products.

The positive nine-month booking performance and the traditionally positive trend of the last quarter makes us confident on the year-end results in terms of revenues, essentially in line with the growth trend of the first nine months.

Please note that the Interim Management Statement at 30th September 2016 is not audited and that it is available in the Investor Relations section of the company’s website: www.datalogic.com. 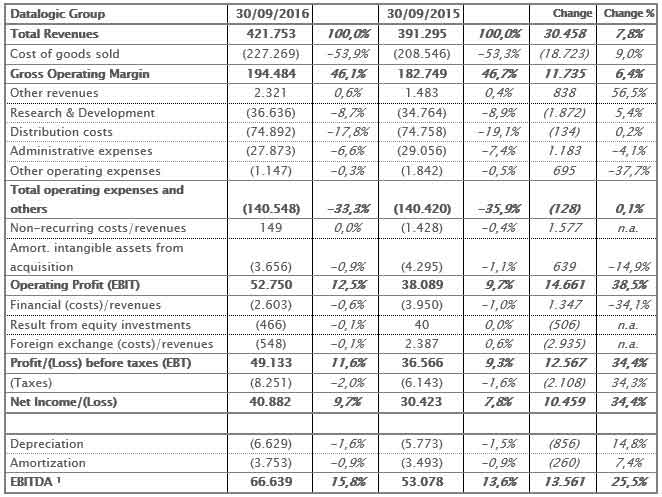 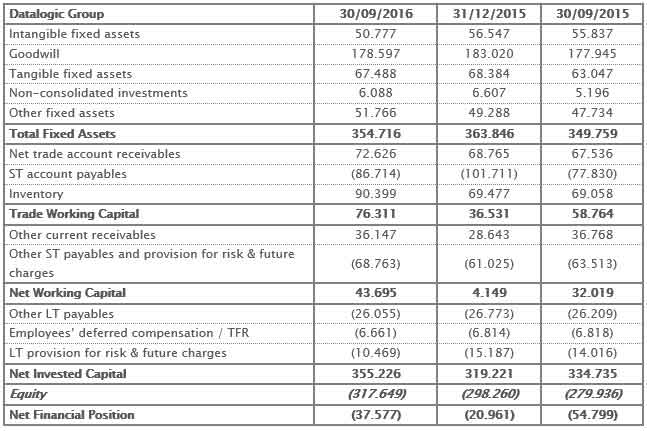 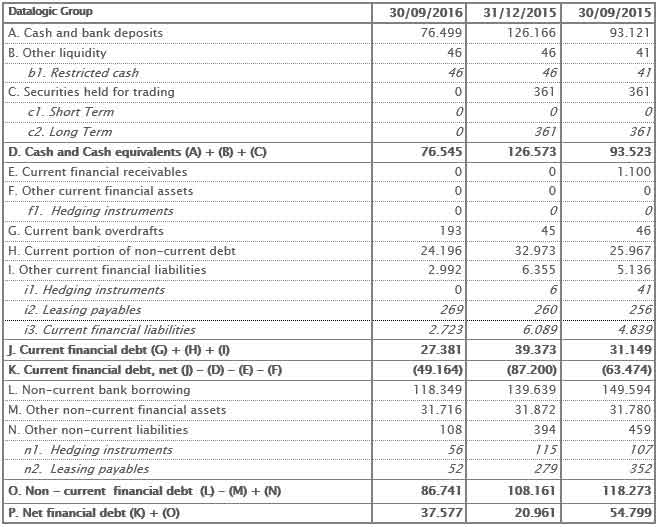