DATALOGIC (Star: DAL.MI) Board of Directors approves interim management statement at 30 September 2011: best ever quarter in terms of revenues and profitability!

Best ever quarter in terms of revenues and profitability:

Strong growth of results in first nine months of 2011:

•  Net profit rose to € 17.2 million vs. € 14.5 million in the first nine months of 2010, notwithstanding € 9.1 million of extraordinary charges, relating to the new supply chain of the Automatic Data Capture (ADC) segment, expensed in the period.

Bologna, 9 November 2011 –Today the Board of Directors of Datalogic S.p.A. (Borsa Italiana S.p.A.: DAL) - a company listed in the Star segment of the Milan Stock Exchange (Mercato Telematico Azionario - MTA) organized and managed by Borsa Italiana S.p.A. (“Datalogic”) and leader in the market for barcode readers, mobile computers, RFID and vision systems - approved the Interim Management Statement at 30 September 2011.
The quarterly results confirmed the growth trend and the positive trend of margins.
The first nine months of the year (9M11) ended with net profit of € 17.2 million compared to € 14.5 million reported in the first nine months of 2010 (9M10). The third quarter (3Q11) showed sales revenues of € 107.1 million (+6.6% vs. the third quarter of 2010 (3Q10)) and net profit of € 9.4 million (vs. € 3.2 million in 3Q10).

Mauro Sacchetto, the CEO of Datalogic S.p.A., commented on results as follows: “We’re very pleased with the exceptional performance of this third quarter, a period statistically featuring a so-called seasonality effect that affects results in terms of efficiency and cash generation.
The measures taken in previous quarters and start-up of the new globally integrated supply chain for the Automatic Data Capture segment, for which over 80% of the investment has been expensed in the first nine months, will permit significant recouping of profitability already as from the next financial year. 10 consecutive quarters of growth confirm the Group’s ability to face up to market challenges and to consider a phase of growth and expansion, also via external development”.

These were joined by € 7.5 million costs of a non-recurring nature, and therefore posted in extraordinary costs, leading to a total of € 9.1 million, accounting for 84% of the total estimated investment of € 10.8 million. These investments have a 1-year payback period and already as from 2012 will permit annual cost savings of € 12.5 million.

At a quarterly level, sales revenues in 3Q11 grew to € 107.1 million (+6.6% vs. 3Q10 and +1.7% vs. the previous quarter (2Q11)) thanks to the commercial strategy and continuous product innovation and despite the seasonal effect that usually penalizes this period of the year.

In 3Q11 costs of € 0.6 million were posted for the new supply chain of the ADC segment, of which € 0.5 million among ordinary expenses. 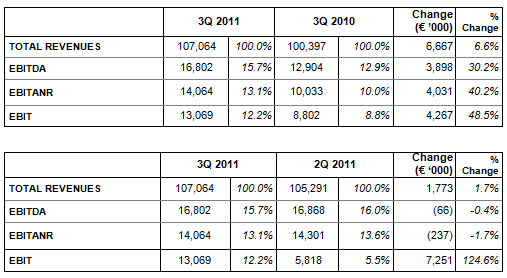 As regards the Group’s operating divisions, all of them reported results featuring very robust growth in 9M11 in terms both of sales revenues and of profitability.

Events in the reporting period

There were no events to report.

Events after end of reporting period

On 20 October 2011 Datalogic placed 2,000,000 of its treasury shares, accounting for about 3.4% of share capital, via an accelerated bookbuilding procedure targeting only institutional investors.

Please note that the Interim Management Statement at 30 September 2011 is not audited and that it is available in the Investor Relations section of the company’s website: www.datalogic.com. 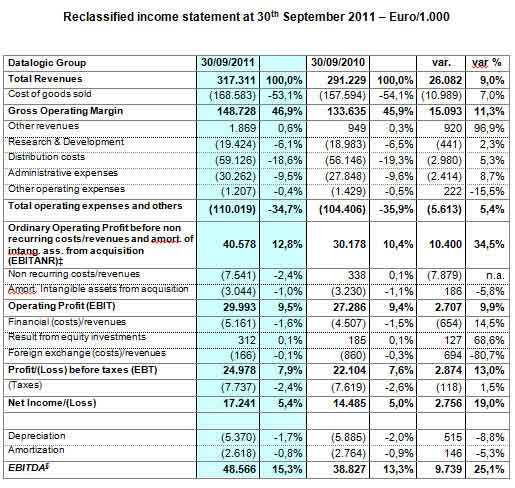 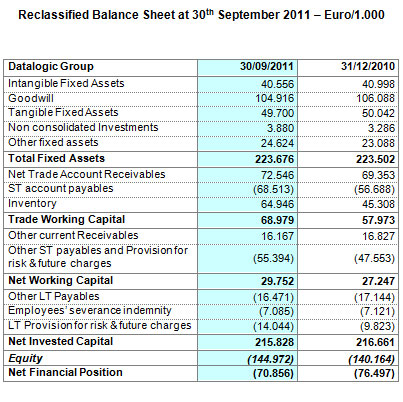 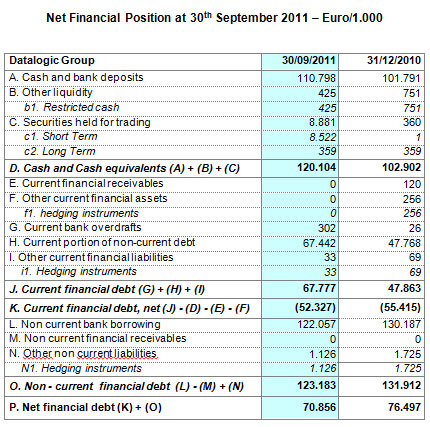