The best ever results for the period confirmed Datalogic’s growth trend in terms of market share. The project for the new integrated supply chain in the ADC (Automatic Data Capture) segment was launched.

The first half (1H11) ended with a net profit of € 7.8 million vs. € 11.2 million reported in the first half of 2010 (1H10). It was driven by a favorable trend both of sales revenues and margins, which made it possible to expense € 8.5 million of extraordinary costs relating to implementation of the integrated supply chain.

Mauro Sacchetto, CEO of Datalogic S.p.A., commented: “The extremely positive first-half results confirm the singular features of Datalogic – a company capable of continuing to grow and generate profit even in a still uncertain market environment. The strategic actions taken in previous quarters, in terms of control of overhead costs and focus on efficiency, allow continuous improvements in terms of margin, as confirmed by an EBITDA margin that hit 16% in the second quarter. These improvements will be even more incisive, significant recouping of profitability as from the next financial year, with adoption of the new integrated supply chain for the ADC, for which over 80% of the investment has already been expensed during the first half. Lastly, our continuous investments in R&D enable us to maintain constant ability to innovate and to assert our technological superiority, assuring us global leadership of the sectors in which we operate”.

During 1H11 extraordinary costs of € 8.5 million were posted, of which € 1.1 million recorded in administrative expenses and € 7.4 million posted in non-recurring costs, concerning adoption of the new supply chain, which had integrated all the Operations processes (production and logistics) of the Datalogic Scanning and Datalogic Mobile divisions in the ADC segment.

This new Operations architecture at international level will ensure greater industrial productivity and will make it possible to take all growth opportunities, expanding the factory in Vietnam, a country developing strongly and a strategic point of the entire Asian area where the market is growing at extremely fast rates.

Datalogic Automation – specialized in the production of barcode, RFID and vision automatic identification systems and accounting for 23% of consolidated sales – featured an increase of 13% in sales revenue and of 46% in terms of EBITDA, € 7.2 million.

The Business Development Division - which includes the companies Informatics Inc. and Evolution Robotics Retail Inc. and accounts for 9% of consolidated sales – achieved a 10% increase of sales revenue to € 18.2 million.

As regards geographical areas, we highlight the good progress of sales in the markets of North America, up by 15% to € 62 million, and Europe, which grew by 12% to € 84 million. Italy showed improvement of 8% to € 24 million, where growth in emerging countries slowed down after the major increases experienced during 2010.

Events in the reporting period (1H11)

•  Sharp improvement in net financial position (1[1]), expected to be positive at between €15 and €20 million

There are no events to report.

The auditing activity for the half-year interim report has not yet been completed and the audit report will be available within the deadlines set at law. The attached balance sheet and income statement are reclassified statements, and as such have not been subject to audit.

Lastly, please note that the half-year interim report at 30th June 2011 will be available upon request at the registered office of Datalogic S.p.A. and at the offices of Borsa Italiana S.p.A., and it could also be consulted on the Company’s web site www.datalogic.com (Investor Relations section). 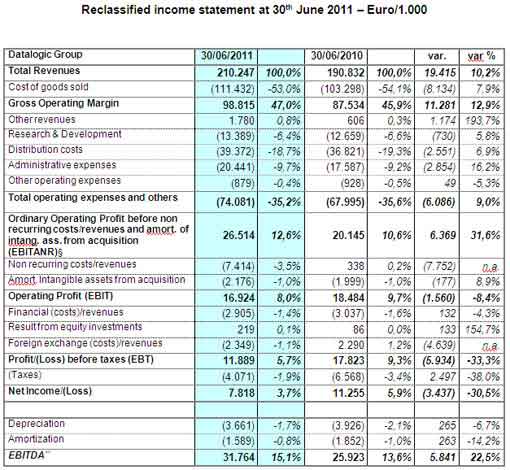 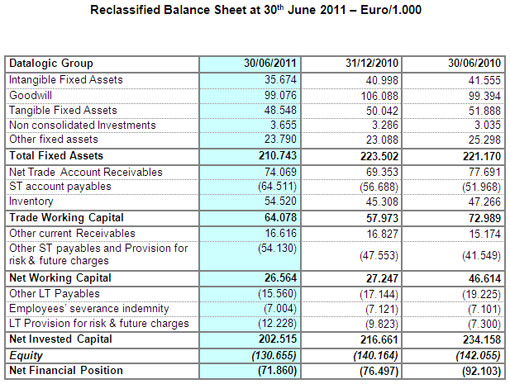 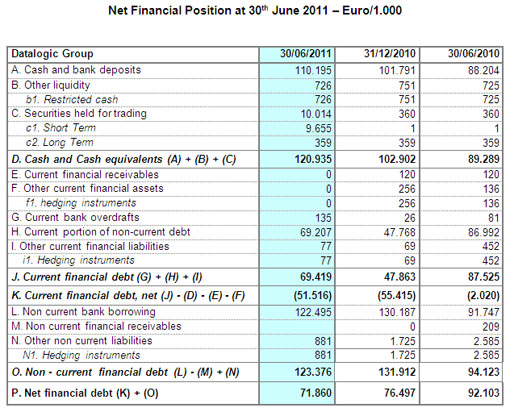