Board of Directors Approves Half-Year Report at 30 June 2019

Bologna, 07 August 2019 - The Board of Directors of Datalogic S.p.A. (Borsa Italiana S.p.A.: DAL), a company listed in the STAR Segment of the Italian Stock Exchange organised and managed by Borsa Italiana S.p.A. (“Datalogic”) and global leader in the automatic data capture and process automation markets, approved its Half-Year Financial Report at 30 June 2019 today.

Chief Executive Officer of the Datalogic Group Valentina Volta commented: " The double-digit growth recorded in North America and the positive acceptance of new products launched in the first half of the year, which is the result of increased investments in R&D, are the positive indicators of the semester that confirm the growth potential of the Group. The uncertain macroeconomic scenario and the slowdown in the main sectors in which we operate in Europe and China, also in the light of the recent events relating to North American tariffs, have however had an impact on the top line of the Group which decreased by 0.8%. Despite the decrease in turnover, we were able to improve, net of the exchange rate effect, the gross operating margin thanks to efficiencies in the cost of sales and to the increased investments in R&D and distribution network without a significant impact on profitability. In light of the continuing uncertainty in the macroeconomic scenario, we expect to close the year in line with the performance recorded in the first half."

Gross operating margin stood at €147.9 million, down 1.1% from €149.4 million in the same period of the previous year. It remained essentially unchanged as a percentage of turnover compared to the first half of 2018, going from 48.7% in 2018 to 48.5% in 2019. At constant exchange rates, the gross operating margin improved 0.9% due to greater industrial productivity and the favourable product mix.

Operating and other costs of €110.8 million were up 4.6% compared to €105.9 million recorded in the same period of 2018 and increased 1.9 percentage points as a percentage of turnover, from 34.5% to 36.4%. In particular, distribution costs increased 10.6% to €59.2 million, equivalent to 19.4% of turnover compared with the 17.4% recorded in the same period of 2018, attributable to the investments made in 2018 to strengthen the commercial organisations. Research and development expenses amounted to €31.4 million (€30.5 million in the first half of 2018), up 3.2% compared to the previous period. Total research and development spending, gross of capitalisations, aimed at the renewal of the product range, increased 13.7% in the first half of 2019 compared with the first half of 2018, amounting to approximately 11% of turnover, in line with the Group's strategy on innovation.

EBITDA decreased 6.2% from €50.8 million in the first half of 2018 to €47.7 million, amounting to 15.7% as a percentage of turnover (EBITDA margin) compared with 16.6% in 2018, due in part to the unfavourable exchange rate performance. At constant exchange rates, EBITDA remained unchanged compared to the first half of 2018, reflecting the increase in investments and research and development, partially offset by the effect of the adoption of the new accounting standard IFRS 16 Leases, which resulted in the recognition of higher depreciation and amortisation of €2.2 million and lower rent and lease payments of €2.3 million.

Net financial position at 30 June 2019 registered a net debt of €17.8 million, compared with net cash of €23.8 million at 31 December 2018 and net cash of €13.3 million at 30 June 2018, due to the payment of dividends and share buyback. Net of the share buyback, the dividend distribution and the adoption of IFRS 16, the cash generation from business activities during the period amounted to €0.3 million (compared with positive €22.7 million in the first half of 2018 and negative €11.1 million at 31 March 2019). This performance was due to the increase in net investments equal to €14.9 million (€7.2 million in the first half of 2018), aimed at rationalising the industrial footprint and at increasing investments in research and development, together with the accounting effects of the application of the new accounting standard IFRS 16 Leases, entailing the recognition of right-of-use assets of €10.9 million and lease financial liabilities of €10.7 million.

The change in net working capital, a negative €14.4 million (€10.6 million in the first half of 2018), was primarily due to the period of transition at the new European logistics hub. Similarly, the change in other assets and liabilities had a negative impact of €8.6 million (€0.1 million in the first half of 2018) due to the increase in VAT credits, attributable to the initial phase of the redefinition of distribution streams in EMEAI.

PERFORMANCE IN THE HALF-YEAR BY DIVISION

In the first half of the year the Datalogic division reported turnover of €282.6 million, essentially unchanged compared to the same period of 2018 (-0.6%), with a positive performance in the Americas, partially offsetting the decline in EMEAI and APAC.

The Retail segment was down 3.7% compared to the previous year, with a slowdown across all geographical areas except for North America.

The Manufacturing segment decreased by 8.7% compared to the previous year. The slowdown in the automotive and consumer electronics markets in EMEAI and China was partially offset by extensive growth on the US market.

The Transportation & Logistics segment recorded strong growth of 13.2% compared to the same period of 2018, driven by a very positive performance in North America.

The Healthcare segment recorded 13.7% growth compared to the first half of 2018, driven by sales in EMEAI and North America.

Sales in the distribution channel increased driven by small and medium-sized customers.

The table below shows Group revenues by geographic area, as achieved in the first half of 2019 versus the same period of 2018:

During the first half of 2019 growth reached 13.7% in North America, due in part to the favourable trend in exchange rates, while there was a slowdown in the APAC area, down 22.5%. The performance in the EMEAI area, down 3.7%.

SIGNIFICANT EVENTS DURING THE HALF-YEAR

We expect that the slowdown in our main sectors of operation in Europe and China (also in the light of the recent events involving North American tariffs) seen in the first half of the year will continue into the second half. The Group thus expects to end the year in line with the performance reported in the first six months.

However, robust growth was seen in North America, and the new products launched during the half-year, as a result of increased investments in R&D, were positively received – indicators that confirm the Group's growth potential in a less uncertain and more uniform macroeconomic scenario across its various markets of operation.

The Board of Directors of Datalogic S.p.A. has also approved:

The Half-Year Financial Report of Datalogic S.p.A. at 30 June 2019 will be available to anyone who requests it from the company headquarters, Borsa Italiana S.p.A. (www.borsaitaliana.it) and the “eMarket STORAGE” authorised storage facility, managed by Spafid Connect S.p.A., and may also be consulted on the company’s website, www.datalogic.com (Investor Relations section), in accordance with the terms set out by law.

This press release contains forward-looking statements about the Group’s intentions, beliefs and current expectations with regard to its financial results and other aspects of the Group's operations and strategies. Readers of the present press release should not place undue reliance on such forward-looking statements, as final results may differ significantly from those contained in the above-mentioned forecasts owing to a number of factors, the majority of which are beyond the Group’s control. 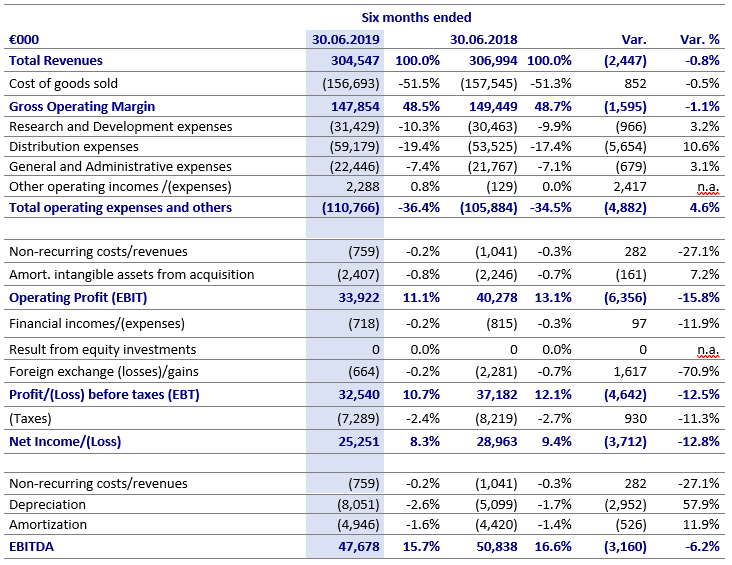 (1) EBITDA (Earnings Before Interest, Taxes, Depreciation and Amortization): this is an economic indicator that is not defined in the IFRSs, but used by the company’s management to monitor and assess its operating performance, as this indicator is not influenced by the volatility deriving from the effects of the different criteria for determining taxable income, the amount and characteristics of capital employed, as well as the related amortisation and depreciation policies. This indicator is defined by Datalogic as Profit/Loss for the period before depreciation/amortisation of tangible and intangible assets, non-recurring costs, financial income and expense and income taxes. 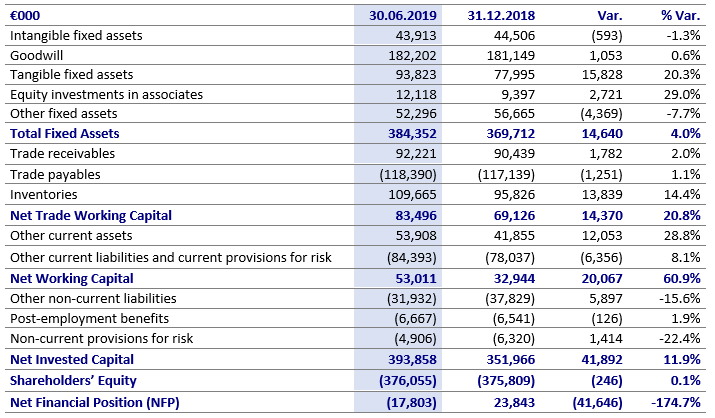 (2) The reclassified balance sheet and financial analysis shows aggregations used by management to assess the Group's financial performance. These measures are generally adopted in the practice of financial communication, they are immediately referable to the accounting data of the primary financial statements, however they are not identified as accounting measures under the IFRS. 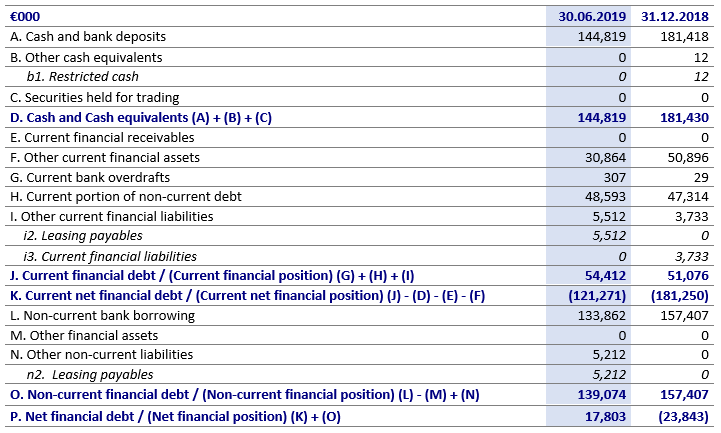 (3) The NFP (Net Financial Position) or Net Financial Debt (NFD): this indicator is calculated in accordance with Consob Communication No. 15519 of July 28, 2006, also including "Other financial assets" represented by temporary investments of liquidity and financial liabilities for emerging operating leases following the application of the new accounting standard IFRS 16.