Board of Directors approves Interim Report at 31 March 2019

Bologna, 14 May 2019 - The Board of Directors of Datalogic S.p.A. (Borsa Italiana S.p.A.: DAL), a company listed in the STAR Segment of the Italian Stock Exchange managed by Borsa Italiana S.p.A. (“Datalogic”) and global leader in the automatic data capture and process automation markets, has approved today its interim report on operations at 31 March 2019.

The Chief Executive Officer of the Datalogic Group, Valentina Volta, commented: “The results of the first quarter showed a double digit growth in the Transportation & Logistics segment and a positive recovery in the Healthcare segment, while in terms of geographic areas, we saw growth in North America and in EMEA, excluding Italy, and a negative performance in APAC area due to the slowdown in China.

The quarter thus ended with a marginal growth in turnover. Nonetheless, thanks to the reduction of production costs, though profitability was penalised by an unfavourable trend in exchange rates, it remained substantially in line with the first quarter of 2018.

We expect the elements of uncertainty in the macroeconomic scenario that gained shape in the first quarter may also impact the current quarter. Nonetheless, we are satisfied with the level of interest of our customers in new products, specifically mobile computers, and we expect a recovery in the second half which, if there are no significant changes in the economic trend, will allow us to record growth also for 2019.”

RESULTS OF THE FIRST QUARTER OF 2019

The gross operating margin, equal to €70.2 million, grew by 0.5% compared to €69.8 million of the same period of the previous year, also showing incidence on revenues substantially in line with the same quarter of the previous year, going from 48.8% in 2018 to 48.5% in 2019, due to the efficiencies in materials costs and the improvement of the mix, which offset the unfavourable trend in exchange rates.

Operating and other costs , equal to €53.9 million, were up 4.9% compared to €51.4 million of the same period of 2018 and increased by 1.3 percentage points in terms of incidence on turnover, going from 36.0% to 37.3%. In particular, distribution costs increased by 12.9% to €29.1 million, accounting for 20.1% of revenues as compared with the 18.0% recorded in the same period of 2018, attributable to the investments made in 2018 to strengthen the commercial organisations. Research and Development costs, amounting to around €14.3 million (€14.5 million in the first quarter of 2018) were substantially in line with the previous period, with an incidence on turnover of 9.9%.

EBITDA decreased by 1.4%, going from €22.0 million in the first quarter of 2018 to €21.6 million, whilst the incidence on revenues (EBITDA margin) came to 15.0%, from 15.4% in 2018. The slight decrease was due to the increase in the incidence of operating costs and to the unfavourable trend in exchange rates, partially offset by the benefit deriving from the adoption of the new accounting standard IFRS 16 - Leases, which resulted in the recording of higher depreciation and lower costs for leases and rentals of €1.3 million.

Financial income was a positive €1.3 million, compared to a negative €1.8 million of the same period of 2018, mainly due to the trend in exchange rate gains and losses, positive for €1.5 million, and higher income from liquidity investments.

At 31 March 2019, the Net Financial Position was negative for €3.9 million, booking a decrease of €36.3 million on 31 March 2018 (when it was positive for €32.3 million) and a decrease of €27.8 million on 31 December 2018 (when it was positive for €23.8 million). The change is mainly due to the accounting effects of the application of the new accounting standard IFRS 16 - Leases, which resulted in the booking of right of use assets for €14.3 million and financial liabilities for leases for €14.1 million. Net of treasury share purchases and the adoption of IFRS 16, period cash absorption deriving from the business came to €11.1 million (positive in the first quarter of 2018 for €2.2 million).

The Net Invested Capital, equal to roughly €394.4 million, booked an increase of €42.4 million compared to the previous year, due to the increase in net working capital of €24.2 million and net investments fixed assets of around €19.7 million, mainly represented by product development and tangible assets, of which around €14.3 million deriving from the adoption of IFRS 16.

PERFORMANCE IN THE QUARTER BY DIVISION

(*) The comparative data for 2018 has been consistently restated as a result of the reallocation of revenues to the various operating segments.

(**) The Channel (Unallocated) segment includes revenues that cannot be directly attributed to the 4 identified segments.

The Retail segment decreased by 2.2% on the previous year (-5.6% at constant exchange rates) seeing a slowdown in all geographic areas except for North America, which grew by 5.3%.

The Healthcare segment recorded a growth of 19.9% (+15.6% at constant exchange rates) on the first quarter of 2018, driven by sales in the EMEAI.

Sales through the distribution channel, above all to small and medium customers not directly attributable to any of the 4 main sectors, recorded an increase of 30.9% (+28.8% at constant exchange rates).

The table below shows Group revenue by geographic area, as achieved in the first quarter of 2019 vs the same period of 2018:

(**) The comparative data has been consistently restated to reflect the new allocations of revenues.

During the first quarter of 2019 growth reached 10.2% in North America, primarily due to the favourable trend in exchange rates, while there was a slowdown in the APAC area, down by 18.2%. Performance in the EMEAI area, which grew overall by 1.5%, was penalised by the negative performance in Italy, while significant growth was recorded in the rest of the area, specifically in DACH countries (Germany, Austria and Switzerland).

SIGNIFICANT EVENTS DURING THE QUARTER

SIGNIFICANT EVENTS SUBSEQUENT TO THE END OF THE QUARTER

Some of the elements of political uncertainty and of the expected global macroeconomic scenario took shape in the first quarter of 2019, resulting in a slowdown in the economic trend in several geographic areas, specifically in China and Italy, while North America was the market with the highest growth for the Group.

The expectations for the main long-term development trends in all the main reference industries are confirmed, despite the signs of slowdown: industrial automation and robotics development in the Manufacturing sector; investments in technology to reduce costs and improve the customer experience of Retail sector customers; increased volumes of deliveries following the development of e-commerce and consequent rise in investments in technologies aiming to minimise errors and reduce delivery terms in the Transportation & Logistics sector; the evolution of the regulatory framework towards higher safety standards in the Healthcare sector.

The macroeconomic scenario that penalised Group revenues, primarily in China and Italy, continues to show several elements of uncertainty, which could also impact the current quarter. Despite this economic outlook, due to new products and the investments made in the commercial organisations, the Group expects to be able to achieve an improvement in the second half of the year, and to close the year pursuing its trend of growth in revenues and recovery in profitability to levels substantially in line with 2018.

Based on the declarations by the Directors and the information available to the company, the Board of Directors verified that the new directors Vera Negri Zamagni and Angelo Busani met the requirements of honourability and independence, and that there were no reasons for ineligibility or incompatibility, as required by the current regulations and the Self-Governance Code.

The Board of Statutory Auditors verified the correct application of the criteria and procedures of verification adopted by the Board to assess the independence of the new directors.

The Board of Directors also verified, based on the audits conducted by the Board of Statutory Auditors, that there were no reasons for ineligibility or incompatibility and that the requirements of professionalism and honourability pursuant to Ministerial Decree no. 162 of 30 March 2000, as well as the requirements of independence set out by law, were met by the new Statutory Auditors, listed below:

Finally, the interim report on operations at 31 march 2019 is not subject to auditing, and will be available to anyone who requests it at the company headquarters or at Borsa Italiana S.p.A. (www.borsaitaliana.it), on the “eMarket STORAGE” instrument, managed by Spafid Connect S.p.A., and may also be consulted on the company’s website www.datalogic.com (Investor Relations section), in accordance with the terms set out by law.

The hereby document contains forward-looking statements related to future events and operating, economic and financial results of the Group.  These forward-looking statements include risks and uncertainties, since they may depend by future events and developments. Final results may differ significantly from those contained in the above-mentioned forecasts owing to a number of factors, the majority of which are beyond the Group’s control. 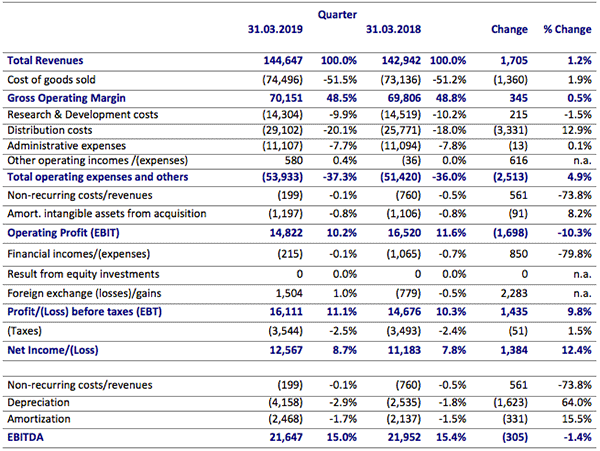 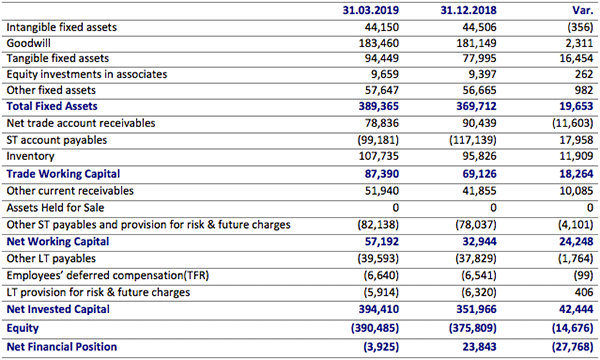 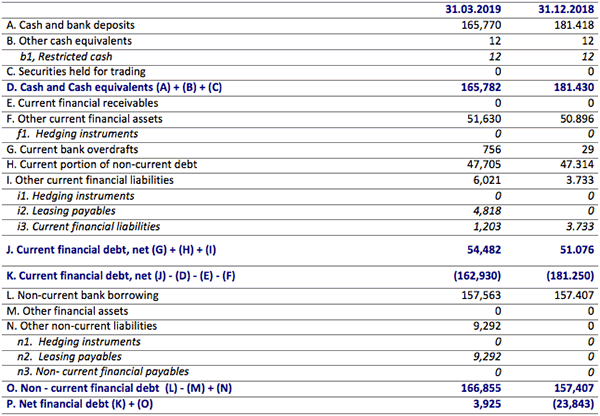 1 EBITDA (Earnings Before Interest, Taxes, Depreciation and Amortization): this is an economic indicator that is not defined in the IFRSs, but used by the company’s management to monitor and assess its operating performance, as this indicator is not influenced by the volatility deriving from the effects of the different criteria for determining taxable income, the amount and characteristics of capital employed, as well as the related amortisation and depreciation policies. This indicator is defined by Datalogic as Profit/Loss for the period before depreciation/amortisation of tangible and intangible assets, non-recurring costs, financial income and expense and income taxes.

2 The reclassified Income Statement and Balance Sheet show measures used by the Management to monitor and assess the financial performances of the Group. Given that the composition of these measures is not regulated by the reference accounting standards, even if they are directly reconcilable to the IFRS statements, they are not subject to any audit procedure by the Independent Auditors.