Home > Company > Investor Relations > Press Releases > The Board of Directors approved the Draft and the Consolidated financial...

ACHIEVED THE BEST RESULTS IN THE LAST YEARS: EBITDA MARGIN AT 15.7% AND

The company saw a strong growth in all economic indicators during 2016 and, in particular, improvement in terms of profitability, with an EBITDA in progress of more than 22% at €90.4 million and achieving an EBITDA Margin of 15.7%, and in terms of cash, with the net financial position returning to a positive balance at €3.5 million compared to negative €21 million last year.

This growth is the result of continuous product investment that allowed the Company to propose innovative solutions to customers and improve its competitive positioning in the reference market.

The CEO of Datalogic Group, Valentina Volta, commented, “We are extremely satisfied with the results achieved in the year just concluded, the best in the Group’s history, which confirm the soundness of the strategic decisions implemented in recent years and the continuous technological innovation, engine of our growth. In addition, 2016 was the year in which we defined the new Datalogic strategy and launched a new organisation to achieve it, which became operational on 1st January 2017. This strategy is based on a unique offer of products and services, as a result of the combination of two divisions, Industrial Automation and Automatic Data Capture, able to meet the needs of customers across the entire value chain.”

The Gross Operating Margin, equivalent to €265.3 million, grew 6.7% from €248.6 million of the prior year (+6.5% at a constant euro/dollar exchange rate), while its impact on revenues declined slightly from 46.5% in 2015 to 46% in 2016, mainly due to the physiological erosion of prices that was not completely offset by improvement in the product mix and purchasing efficiencies.

EBITDA posted significant improvement, up 22.5% to €90.4 million compared to €73.7 million in 2015 (+22.2% at constant euro/dollar exchange rate). As a percentage of revenue (EBITDA Margin), the figure grew 1.9 percentage points to 15.7%, the best result in the last 12 years, compared to 13.8% in the previous year, mainly due to containment of operating costs, which were essentially in line with 2015.

Financial income was negative for €3.0 million compared to a negative €1.5 million in the previous year, principally as a result of a less favourable trend in exchange differences, while bank expenses decreased by €1.5 million.

The net financial position is positive, with a balance of €3.5 million, posting an improvement over the net financial debt in 2015 of €21 million, attributable to continuous and robust cash generation, also after the dividend distribution.

For purposes of segment disclosure, the data as at 31st December 2016 includes the new company Solution Net Systems Inc., established on 1st October 2016, within the IA Division, consistent with the first three quarters of 2016 and the previous year.

The ADC (Automatic Data Capture) Division, specialized in the design and production of fixed retail scanners, professional handheld readers and mobile computers, posted growth of 9.3% in turnover, to €397.6 million compared €364 million in 2015 (+9.1% at constant euro/dollar exchange rate), led principally by sales in fixed retail scanners and mobile computers for the retail market, both in Europe and the Americas.

The Industrial Automation Division, specialized in the design and production of automatic identification systems, safety, detection and marking solutions for the Industrial Automation market, reported a turnover of €158.5 million as at 31st December 2016, up 8.5% from €146.1 million in 2015 (+8.8% at constant euro/dollar exchange rate). The division benefitted from sustained growth in both T&L and Manufacturing in Europe, China, and, particularly in the last quarter, in North America, where it posted double-digit growth.

The division’s margins showed considerable improvement from the prior year, +30.7% to €11.2 million, with EBITDA Margin of 7.1%.  Excluding the results of the Systems BU and the newly formed Solution Net Systems Inc., the divisional EBITDA is €12.2 million, or 8.8% of revenues.

With regard to geographic areas, the European market (including Italy), which represents more than 50% of turnover, continues to show considerable growth (+12% YOY) in both divisions. Instead, the lower growth rate in North America compared to previous quarters is essentially attributable to important projects completed in last quarter of 2015 by the ADC Division, which were only partially offset by double-digit growth of the IA Division in the same region.

On 16th April 2016, a new manufacturing plant was inaugurated in Balatonboglar, Hungary, consisting of 7,000 sqm dedicated mainly to the production of factory automation devices. This represents more than €9 million invested between 2014 and 2016 with the aim of expanding the Group’s production capacity and ensuring greater flexibility and the highest quality in the production process due to the introduction of three new lines that use machinery with surface mount technology.

On 1st October 2016, the spin-off of the Systems Business Unit became operational with the consequent formation, by Datalogic Automation Inc. (the Company’s American subsidiary), of a newco known as Solution Net Systems, Inc. The headquarters are located in Quakertown, Pennsylvania (USA) and all of the assets of the Systems BU were transferred to the location. Hence, from that date, Solution Net Systems, Inc. provides customers of the Datalogic Group with integrated solutions for automated distribution in the postal and retail markets, previously provided by the Systems BU of the Industrial Automation Division.

On 18th October 2016, Alessandro D'Aniello was appointed new Group CFO and Manager responsible for drawing up the company's financial statements within the Datalogic Group.

On 20th December 2016, the Board of Directors appointed Valentina Volta as Chief Executive Officer of Datalogic Group effective 1st January 2017, with all executive powers, excluding the M&A and Real Estate areas, which will remain the sole responsibility of the Chairman, Romano Volta. Ms. Volta was already a member of the Company’s Board of Directors and previously the CEO of the IA Division. Pietro Todescato, formerly CTO of the Datalogic Group and member of the Company’s Board of Directors, was assigned the responsibility for Global Product Marketing, dedicated to breakthrough product innovation.

The Group’s new organisation was launched at the beginning of the year, focusing all business processes on the customer and optimising the corporate structure, which resulted in the activities of the ADC Division (Automatic Data Capture) and IA Division (Industrial Automation) being combined in a single legal entity in each region in which the Group operates. This reorganisation will allow Datalogic customers in the Retail, Transportation & Logistics, Manufacturing and Healthcare segments to further benefit from the utmost quality in terms of products and effectiveness of offered services.

Revenue growth at a higher rate than the reference market is expected to continue in 2017, with a particular focus in North America and APAC, while the Group will further consolidate its leadership position in Europe.

The core driver of growth is the new strategy as well as the new operational and organisational model adopted from 1st January 2017: focus on the end customer through new business structures dedicated to the four reference sectors: Retail, Manufacturing, Transportation & Logistics and Healthcare; Datalogic’s ability to offer an entire range of innovative products and solutions in each of these sectors, as a unique, integrated entity in the reference competitive context; at the same time, maintaining a strong presence and focus on distribution partners, through the newly founded Group Channel Department.

The Group will continue to invest heavily in Research and Development, which has been strengthened by the creation of a new department focusing on breakthrough innovation, and in improving service levels to customers of the new Customer Service Department.

In addition, the continuous optimisation of operations and careful attention to production and operating costs will allow the Group, within the context of a relatively stable macroeconomic scenario, to achieve the objectives of additional improvement in the financial stability and profitability over the medium/long term.

At the Shareholders Meeting planned to take place on 4th May 2017 the Board of Directors will propose to distribute an ordinary unit dividend, gross of legal withholdings, of 30 cents per share (+20.0% compared to 25 cents per share paid for 2015), for a maximum amount of approximately 17.5 million Euro, with coupon detachment on 8th May 2017 (record date 9th May 2017) and payment from 10th May 2017. 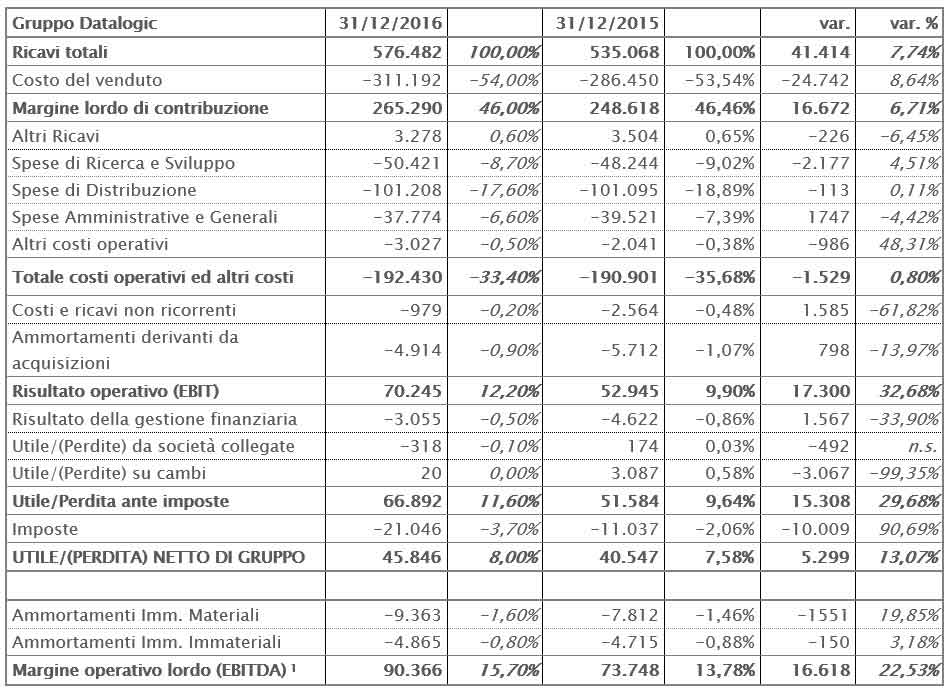 [1] EBITDA - Earnings before interest, taxes, depreciation and amortization. The EBITDA is used by the Management to monitor and assess the operational performance of the Group and is not identified as an accounting item within IFRS.  Given that the composition of this measure is not regulated by the reference accounting standards, it is not subject to any audit procedure by the Independent Auditors. 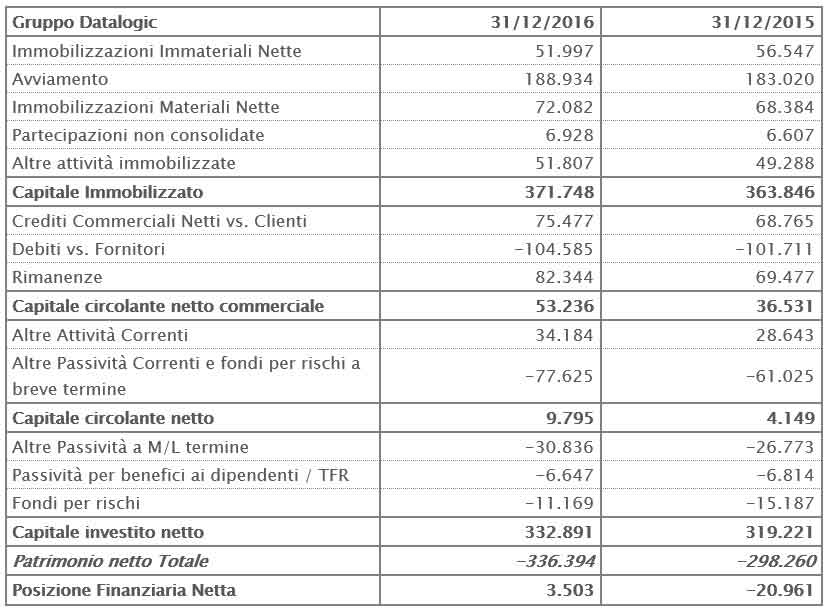 2 The reclassified Balance Sheet shows measures used by the Management to monitor and assess the financial performances of the Group. Given that the composition of these measures is not regulated by the reference accounting standards, even if they are directly reconcilable to the IFRS statements, they are not subject to any audit procedure by the Independent Auditors. 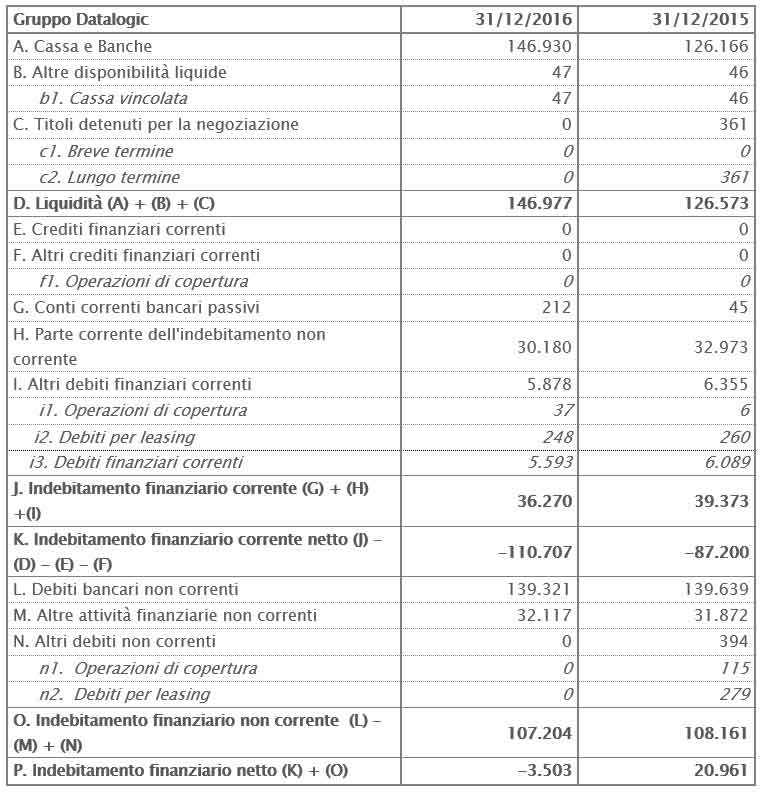