Home > Company > Media Center > Press Releases > The Board of Directors approved the Draft and the Consolidated Financial...

RESULTS AT THEIR HIGHEST IN DATALOGIC HISTORY:

Bologna, 21 March 2018 – The Board of Directors of Datalogic S.p.A. (Borsa Italiana S.p.A.: DAL), a company listed in the STAR Segment of the Italian Stock Exchange managed by Borsa Italiana S.p.A. (“Datalogic”) and global leader in the automatic data capture and process automation markets, approved yesterday the draft and the Consolidated Financial Statements as of 31 December 2017.

Results for FY2017 show an increase in all financial indicators. Driven by higher sales revenues, improved cost of goods sold and operating cost savings, EBITDA rose 14.3% to €103.3 million, with EBITDA margin climbing to 17%, EBIT grew 18% to €82.9 million and net profit improved 31% to €60.1 million.

The Chief Executive Officer of Datalogic Group, Valentina Volta, commented: "I am satisfied with the results achieved in the year just ended. 2017 was a year of significant changes for the Datalogic Group both strategically and from an organizational standpoint, with the transition from a product-oriented to a customer-centric model and the reorganization into four divisions. In terms of revenues, profitability and net financial position, we achieved the best results ever in our history. The new model, which is highly valued by our customers, has already shown tangible benefits on this year's performance, with soaring growth rates in the Chinese market, especially in the Manufacturing sector, double-digit increase in the Healthcare and T&L segments in the USA and in the Retail segment in EMEA.  North America, a strategic area for us, was penalized by the exchange rate effect and a negative performance in the Retail sector due to the launch of new dedicated products only late in the year. Starting from the current year, our investments in the commercial structure will focus on the US market to fully capitalize on the potential of our range of products and services in all main segments. One year after launching the new organization, I am very confident about the company's growth prospects, the additional benefits we may reap from the new business model and the management’s ability to continue managing change and face ever-more ambitious challenges for profitable growth in a market that, though highly competitive, is driven by a strong increase in demand for products and solutions our Group can successfully provide”.

PERFORMANCE IN THE FINANCIAL YEAR

The Group's results as at 31 December 2017 include data for the third and fourth quarter of Soredi Touch Systems GmbH, a company acquired on 6 July 2017.

Booking for the year - i.e. orders already acquired - reached €626.6 million, up 6.9% YoY (€586 million in 2016). New products accounted for 12.7% of turnover for the year (24.3% in 2016) ant it is attributable to the time lapse between the removal from the index of new products and the inclusion of new products launched mainly in the second half of the year.

The gross operating margin, of €288.4 million was up 8.8% from €265.1 million achieved in the same period of the previous year (+9.4% at constant Euro/Dollar exchange rate); as a percentage of revenues, it improved by 1.6 percentage points, from 46% in 2016 to 47.6% in 2017. The improvement was mainly due to higher sales volumes, improved sales mix and greater efficiency in the main components of the cost of goods sold.

EBITDA[1] grew 14.3% from €90.4 million in the previous year to €103.3 million (+14.5% at constant Euro/Dollar exchange rate) with the EBITDA margin posting strong growth to 17% compared to 15.7%, mainly due to improved gross operating margin and containment of operating costs which remained essentially in line as a percentage of sales.

The financial income was negative by €7.3 million, compared to a negative €3 million in 2016, mainly due to foreign exchange losses of €3 million, both as a result of a purely accounting effect from intercompany eliminations and the Dollar depreciation effect on the Group's net balances. The increase in financial charges is attributable to the increase in gross debt while the increase in bank fees was affected by the €437 thousand release of up-front fees as a result of the early repayment of the long-term loan in the first part of the year.

The Group’s net profit was €60.1 million, up 31% compared to the profit achieved in the same period of last year, amounting to €45.8 million.

At 31 December 2017, the net financial position[2] was a positive €30.1 million, posting an improvement of €26.6 million compared to the prior year (positive by €3.5 million), attributable to continuous and robust cash generation, even after the dividend distribution.

Performance in the fourth quarter was especially affected by the negative performance of the Euro/Dollar exchange rate that influenced revenue growth; revenues were €155.3 million, up 0.4% compared to the fourth quarter of 2016. At constant Euro/Dollar exchange rate, the growth recorded compared to the same period of 2016 is +3.7%.

The growth recorded is mainly due to the excellent performance in China and EMEA, which also benefited from the recent acquisition of Soredi Touch System, while there was a decline in North and Latin America.

- The Retail sector recorded a downturn of 1.6% compared to last year (-0.7% at constant Euro/Dollar exchange rate) mainly due to a slowdown in sales in North America following the postponement of projects with major customers and the launch of new key products for this segment that only took place late in the year. EMEA and China confirmed the growth trend.

- The Manufacturing sector continued to expand, with growth of 10.1% YoY (+10.6% at constant Euro/Dollar exchange rate) mainly driven by business developments in China.

- After difficulties in the early months of the year, the Transportation & Logistics segment posted double-digit growth in the subsequent quarters in all geographic areas, mainly driven by North America and China. In 2017, growth was 12.9% compared to 2016 (+14.3% at constant Euro/Dollar exchange rate).

Finally, sales through the distribution channel, especially to small and medium-sized customers not directly attributable to any of the 4 main segments, reported extremely positive performance, with growth of 14.2% YoY, concentrated in EMEA and North America.

On 13 April 2017, Datalogic S.p.A. signed an agreement for a new credit line of €250 million expiring in 2023. Part of the loan was used to early repay the already existing credit line for €126 million while the other part will be used to support the Group’s ordinary business and development.

On 4 May 2017, the Extraordinary Shareholders’ Meeting approved – among others - amendments to Articles 6 and 9 of the Company’s Articles of Association aimed primarily at introducing the “increased vote” right for long-term shareholders of the Company pursuant to article 127 quinquies of Italian Legislative Decree no. 58/1998 ("TUF" – Consolidation Finance Act) introduced by art. 20, paragraph 1 bis, of Decree Law no. 91/2014 converted into Law no. 116/2014 (the "Competitiveness Decree").

On 6 June 2017 a binding agreement was signed, and then concluded on 6 July, for the acquisition of 100% of the share capital of the German company Soredi Touch Systems GmbH, a leader in technology for terminals, especially forklift terminals. The transaction envisaged a total maximum financial commitment for Datalogic of €10 million by 2021, of which €8 million cash and €2 million treasury shares.

On 23 November 2017, the director Pier Paolo Caruso resigned from his office as a member of the Datalogic Board of Directors. The non-independent and non-executive resigning Director was not a member in board committees.

The global macroeconomic scenario points to continuation of the economic recovery already under way in the main areas of the Group’s operations.

In all reference segments, the Group continues to record constant growth, driven by the ever-increasing demand for industrial and business process automation aimed at improving productivity, increasing efficiency and meeting ever higher quality standards in production process control. Private initiatives and government plans designed to boost investments in technological transformation (Industry Plan 4.0) and robotics development in the Manufacturing sector, accelerated growth of e-commerce, developments in multi-channel distribution and data collection and analysis of consumer habits that improve customer experience in the Retail sector, constant evolution of the regulatory framework towards higher safety standards in the more regulated sectors such as Healthcare and airport systems in the Transportation & Logistics segment are the main development trends that the Group will have to seize and satisfy through its products and services in the coming years.

As part of its growth strategy, the Group plans to steadily increase its investment in Research & Development, improve customer service levels, further strengthen its commercial structures in all the main development areas with special focus in North America and to continue streamlining production costs along with strong monitoring of operating costs and overheads.

Unless significant changes occur in the current economic and sector trends, the Group expects to be able to pursue revenue and profitability growth also in 2018, while maintaining a sound financial position and continuing to generate cash. 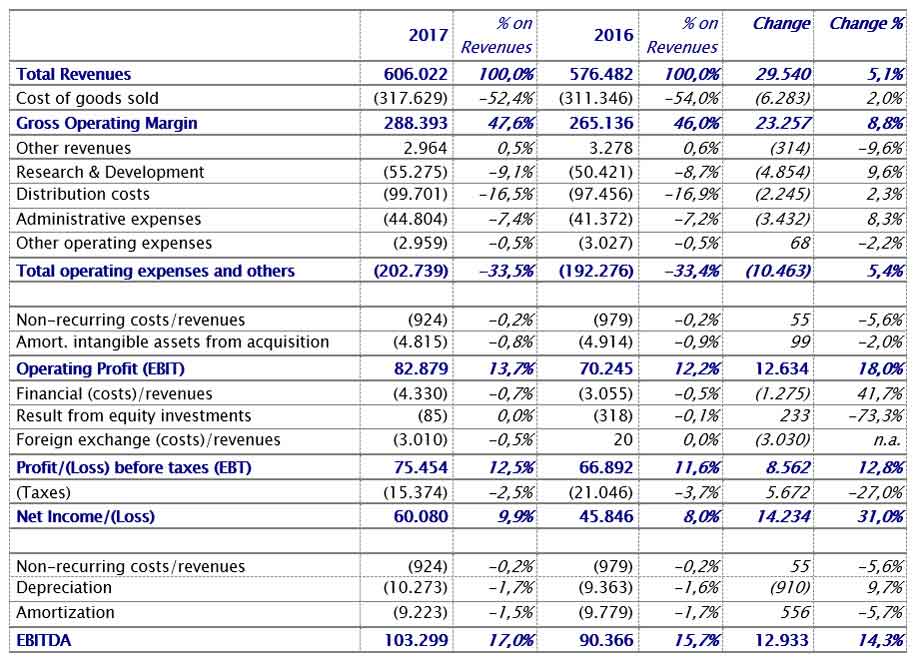 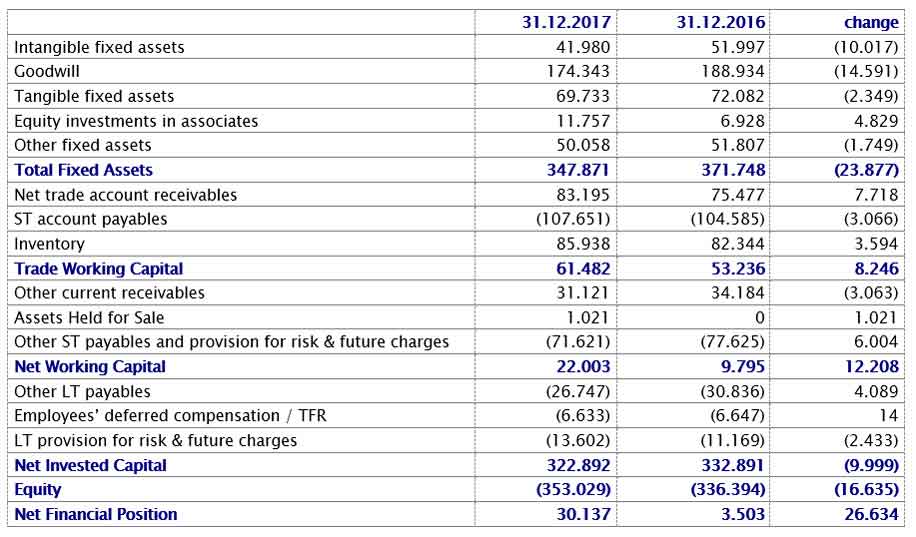 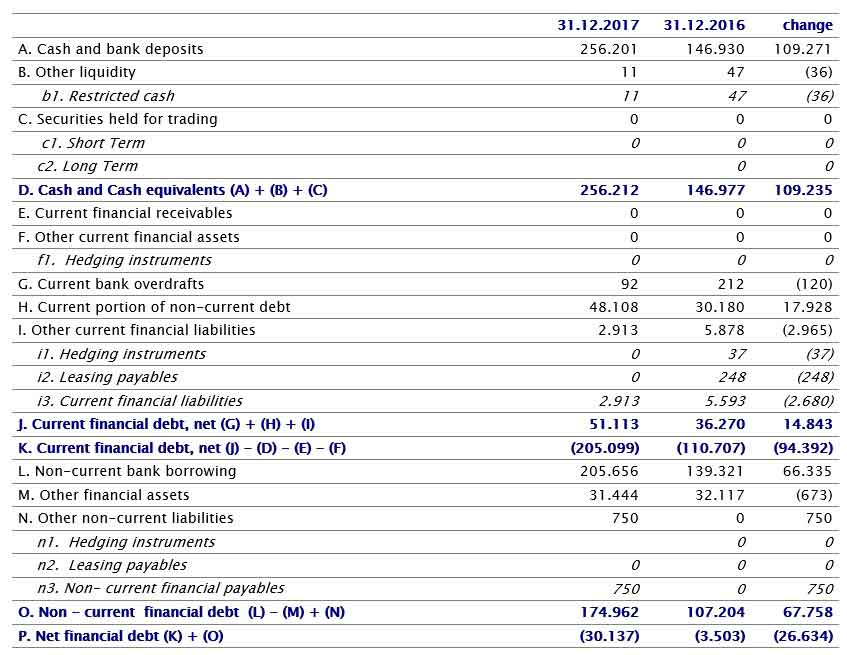 [1] EBITDA (Earnings Before Interest, Tax, Depreciation and Amortization): this indicator is defined by Datalogic as Profit/Loss for the period before depreciation/amortization of tangible and intangible assets, non-recurring costs/revenues, financial income and expense and income taxes;
[2] Net Financial Position or Net Financial Debt: this indicator is calculated in compliance with Consob Communication no. 15519 of 28 July 2006, also including other financial assets consisting of temporary liquidity investments.
[3] The reclassified Balance Sheet shows measures used by the Management to monitor and assess the financial performances of the Group. Given that the composition of these measures is not regulated by the reference accounting standards, even if they are directly reconcilable to the IFRS statements, they are not subject to any audit procedure by the Independent Auditors.
Download PDF
How can we help you today?
Let's chat
1