GO LIVE OF THE NEW CUSTOMER FOCUSED ORGANIZATION: ALL FINANCIAL INDICATORS UP

Bologna, 16th May 2017 – The Board of Directors of Datalogic S.p.A. (Borsa Italiana S.p.A.: DAL), a company listed in the STAR Segment of the Italian Stock Exchange managed by Borsa Italiana S.p.A. (“Datalogic”) and global leader in the automatic data capture and process automation markets, approved yesterday the Quarterly Financial Report at 31st March 2017.

The first quarter ended with a net profit of Euro 11.9 million, up by 18.2% compared to the first quarter of 2016 with a significant increase in all the main economic indicators. In particular, the positive performance of revenues and the cost of goods sold resulted in an improvement of the gross operating margin both in absolute terms, as it increased + 6.6% to Euro 66.2 million as well as in terms of effect on revenue (from 45.9% to 46.8%), resulting in improved EBITDA by 10.3%, reaching Euro 20.8 million.

The Group’s Chief Executive officer, Valentina Volta, commented: “I’m very satisfied with the results obtained in the first quarter the year, given the go live of the new customer centric organization and the planned conclusion of deliveries in the first two weeks of the year. Our core business has grown in all geographic areas, China and North America in particular. Our new customer centric organization has allowed us to focus more on the manufacturing and healthcare sectors, the revenues of which increased by 11% and almost 70%, respectively. The improvement of the cost of goods sold and a sales mix that is more targeted to customers with a higher propensity to purchase, such as those in the manufacturing sector, allowed us to improve our EBITDA. This performance, supported by the high level of investments in Research and Development and bookings on the upturn makes us confident that we will achieve positive results during the rest of the year as well.”

We hereby reiterate that on 1st January 2017 the Group’s new organization has entered into operation, therefore the figures as at 31st March 2016 were reclassified as necessary for uniformity with the 2017 figures.

New products on sales were equal to 18.7% (compared to 27.6% in first quarter 2016), mainly due the exit from statistics of cross industries products with high impacts on revenues whose strong pipeline of “breakthrough” substitutes is planned to go to market starting from second half of the year, and the entering the statistics of industry specific products with lower impact on turnover but longer lasting life.

During the quarter bookings (already confirmed orders) were Euro 161 million, up by 14.8% compared to the first quarter of 2016, confirming the expectations of growth for the subsequent months as well.

The gross operating margin rose by 6.6% to Euro 66.2 million, compared to Euro 62.1 million in the same period last year (+ 6.4% at constant Euro/dollar exchange rates) while its effect on revenues has improved from 45.9% in 2016 to 46.8% in 2017 due to the fact that sales prices were substantially maintained and the cost of goods sold was improved.

Operating costs of Euro 49.6 million increased by 5.5% (at constant exchange rates the increase would have been equal to 4.1%) compared to Euro 47.0 million in the first quarter of 2016, standing at 35.1% of sales and remaining essentially unchanged compared to the same period last year. This performance reflects an increase in the costs for research and development, the true engine of the Group’s growth, which increased by 9.1% to Euro 13.2 million, i.e. 9.3% of revenues compared to 8.9% in the first quarter of 2016.

The net financial position as at 31st March 2017 is negative by Euro 10.5 million and has worsened compared to 31st December 2016, when it was positive by Euro 3.5 million. This change is mainly due to investments that took place during the period and also to the natural increase of the trade working capital in the first quarter of each year.

(*) With the purpose to better report the operating sectors economic performances, it was deemed appropriate to highlight the Divisional EBITDA as monitoring KPI.

Beginning from the current business year the new organizational model entered into operation reflecting Datalogic’s new approach to its market positioning, with a consequent shift from a product-centered divisional model to one focused on customers and organized in four reference sectors (Retail, Transportation & Logistics, Manufacturing and Healthcare).

In light of the new operating structure and the corporate reorganization, during 2017 the operating sectors of the following divisions were redefined: Datalogic, Solution Net Systems and Informatics.

The Datalogic division which constitutes the core business of the Group and includes revenues from four reference sectors (Retail, Manufacturing, Transportation & Logistics and Healthcare), had sales of Euro 131.5 million up by 6.3% (+4.9 % at constant Euro/dollar exchange rates) compared to the first quarter of 2016, with positive performances in Europe, North America and, above all, China. The division’s EBITDA increased by 12.7%, in greater proportion than the increase registered by the Group.

The following table provides a breakdown of the revenues of the Datalogic Division, by business sector:

The Retail sector confirms its position as the major sector of the company with results essentially stable compared to last year.  Europe is the main area for this sector in terms of total turnover as well as growth in terms of percentages, offset by a slowdown in North America due to the postponement of several important projects to the upcoming quarters on account of orders that were higher than expected for fixed retail scanners.

The Manufacturing sector that represents more than one fourth of the Datalogic Division revenue was, in absolute terms, the sector that grew the most. The increase referred in particular to China and North America, areas that constitute a priority for this sector.

The Transportation & Logistic  sector performed positively in China and North America thanks to large projects with major worldwide courier companies.

Finally, the Healthcare sector has registered the highest level of growth, in terms of percentages, among all the sectors of the Datalogic Division. Investments in this sector show the results in terms of increases in revenues in particular in North America, where sales doubled compared to last year thanks to the award of a contract of over 19,000 barcode readers for one of the top U.S. hospital chains.

The Solution Net Systems Division had sales of Euro 5 million, a 5.5% increase compared to the first quarter of 2016 (+2.7% at constant Euro/dollar exchange rates), continuing to benefit from the order received from Royal Mail.

The Informatics Division reported sales of Euro 6 million, down by 19.1% (-21.7% at constant Euro/dollar exchange rates) compared to the first quarter of 2016, mainly due to the seasonality and to a new business model adopted during 2016, which involved a shift from product sales to license sales.

With regard to geographic areas, in the first quarter of 2017, there was a consolidation in the European market with a growth of 7.3%, to Euro 78.5 million. The performance of sales in the APAC market was very positive, entirely due to the growth in China, where the increase exceeded 30%.

EVENTS SUBSEQUENT TO THE END OF THE QUARTER

On 13th April, Datalogic S.p.A. signed an agreement for a new credit line of Euro 250 million expiring in 2023. A part of the loan was used to repay, prior to the original expiration date, the already existing credit line for Euro 126 million and in part used to support the Group’s ordinary business and development. The transaction was concluded at a fixed rate, so as to allow Datalogic to leverage the still favourable market window of interest rates and to fix the cost of borrowing of Datalogic Group for the next years.

The results of the first quarter confirm the positive trend experienced by the Group in all the major geographic areas and in particular China with growth exceeding 30%. The double digit growth and the positive reactions received from customers show that the Group’s strategy, the efficacy of the new customer focused business model and the new organization are well grounded.

For rest of 2017, we expect revenues to continue to grow at a rate that exceeds that of the reference market, with a particular focus on North America and APAC, while within the EMEA region we expect to further consolidate our leadership position.

The Group will continue to invest significantly in Research and Development, an activity that is strengthened through the creation of a new department focused on “breakthrough innovation” and the improvement of service levels to customers assigned to the new Customer Service department.

Please note that the Quarterly Report at 31st March 2017 is not audited and that it is available in the Investor Relations section of the company’s website: www.datalogic.com. 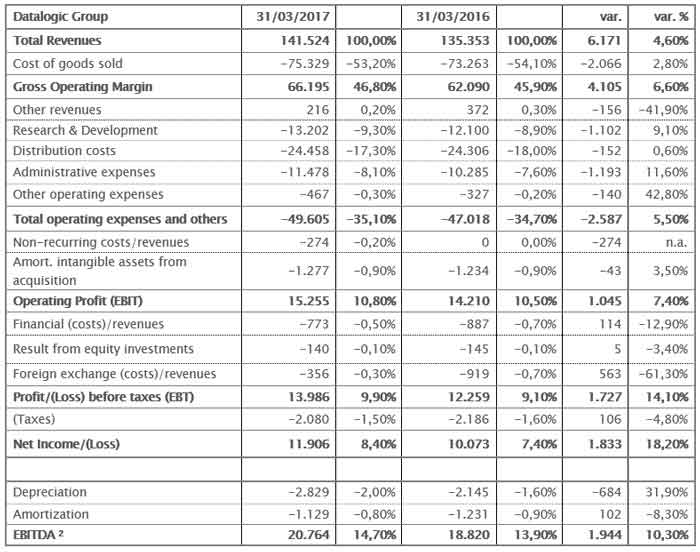 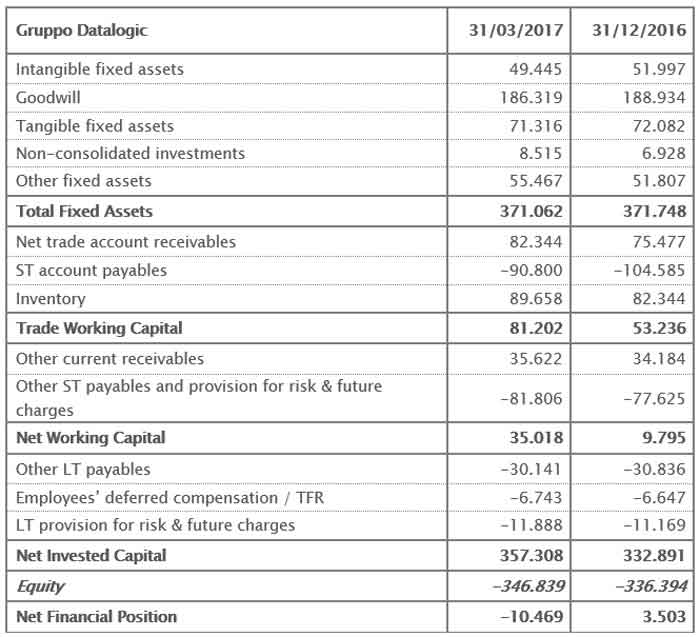 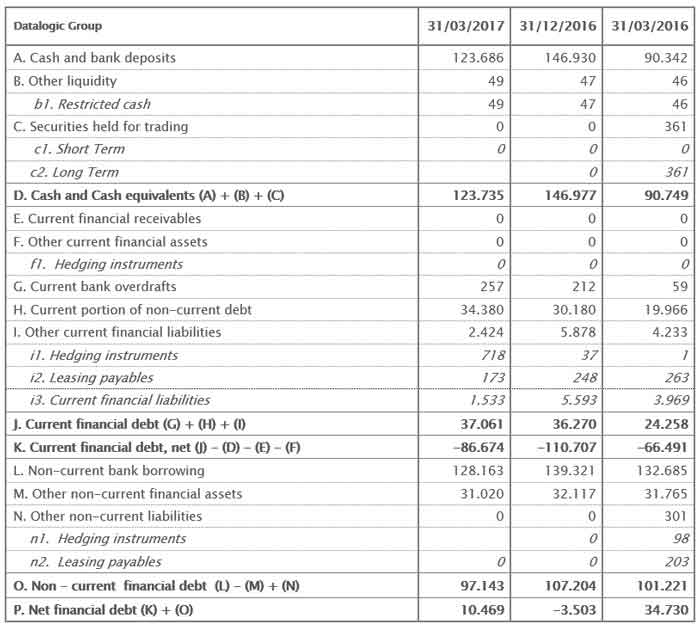 [1] EBITDA (gross operating margin) is an economic indicator which is not defined in the IFRSs, but is used by the management of the company to monitor and assess its economic performance, as it is not influenced by the volatility which is due to the various criteria used to determine the taxable income, amounts and characteristics of the capital employed and the relative amortization/depreciation policies implemented. Datalogic defines this indicator as the profit/loss for the period, gross of amortisation of intangible and depreciation of tangible assets, non-recurring costs, financial income and expenses and income tax.

[3] The reclassified Balance Sheet shows measures used by the Management to monitor and assess the financial performances of the Group. Given that the composition of these measures is not regulated by the reference accounting standards, even if they are directly reconcilable to the IFRS statements, they are not subject to any audit procedure by the Independent Auditors.